With Lewis Hamilton winning his fifth World Championship in Mexico on the 28th of October this year, comparisons with Michael Schumacher have already started and all kinds of statistics have been drawn up to calculate how realistic it is for Lewis to go after the German’s records. However, in the midst of all this, one man who has not been mentioned enough is the one whose record Hamilton has matched with the help of his fifth title, Juan Manuel Fangio – a man who ruled the world of motorsport in the 1950s.

And Fangio also had it much harder in his era. Although there were very few races on the calendar, the
actual events were much longer – for example, the Monaco Grand Prix was a mammoth 105 laps, which
obviously means that a comparison with any modern driver is somewhat unfair. What’s also unfair is the
fact that the sport was so much more dangerous back in the 50’s, and not just on the track.

Fangio was very much at the forefront of motorsport when it was in the midst of its most dangerous era.
But it was an incident in Cuba in February 1958 which proved that even a multiple World Champion
wasn’t safe from external threats. Incredibly, Fangio was kidnapped by Fidel Castro’s men in the middle
of the race weekend.

Fangio had arrived in Cuba with great confidence and had set the fastest time during practice. But, the
night before the race, two gunmen burst into Hotel Lincoln in Havana, where Fangio and other drivers
were staying.

At the time, Cuba was going through monumental changes as Castro’s forces attempted to take control
of the country and implement a communist state. To highlight their cause, kidnappers attempted to take
Fangio and rising star Stirling Moss hostage. The kidnappers let Moss go after Fangio asked them to do
so as Moss was ‘on his honeymoon’. The kidnapping was carried out more as a statement to the Cuban
Government under Batista than causing harm to Fangio.

The incident caused a stir worldwide, with the majority of people critical of Castro orchestrating the
kidnapping of a man who was a foreigner in Cuba and had nothing to do with the political scenario of
the country.

The Batista Government’s forces were left red-faced as they frantically launched an operation to find
Fangio. The kidnappers on the other hand were apprehensive; they knew that if they confronted
Batista’s forces directly, it could result in Fangio being killed or injured and they did not want that
burden on their head. 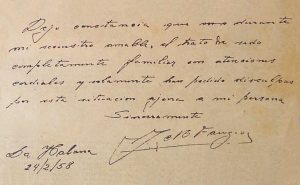 The letter Fangio wrote while in captivity informing everyone that he was alive.

After careful consideration, the kidnappers contacted the Argentine Embassy and after a short
negotiation with ambassador Raul Lynch, it was agreed that Fangio would be dropped off close to the
ambassador’s residence. According to what was agreed, the kidnappers dropped Fangio two blocks
away from the ambassador’s residence at around midnight on the day the race was held, which gave
them time to flee without being noticed by the government forces. The drop-off was successful and
Fangio returned to his normal life. 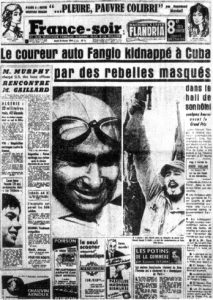 How the media covered Fangio’s kidnapping.

Later, Fangio told the media that he was treated with great care while in captivity and that he held no ill-
will for the kidnappers. In fact, he was told that when the revolution would be successful, he would be
invited to Cuba as a special guest. While the revolution was successful, Fangio did not return to Cuba till
1981, when, in a strange twist of fate, he brokered a deal to supply Mercedes trucks to Castro’s
government.

Soon after the incident, Fangio was paid $1000 to appear on the Ed Sullivan television show in New
York. Fangio said that it was ironic that the kidnapping was what warranted an appearance from him on
the show and not his Five World Championships.

What is interesting and of note, is that in June 1991, on Fangio’s 80th birthday, there were messages for
him from all over the world including one particular letter signed, “Your Friends, The Kidnappers”. This
showed that even after 33 years of the incident, not only the rest of the world but even the kidnappers
did not forget him.

The 1958 kidnapping incident was not a one-off case where Fangio was either witness to, or in the
limelight for. Far from it in fact.

Fangio began his Formula 1 career with Alfa Romeo in 1950, and in his first season finished second in the
drivers’ Championship. He continued his dominance with Alfa Romeo the following season and won his
first championship that year after winning three races in Switzerland, France and Spain.

Despite being the reigning and defending world champion, Fangio found himself without a drive the
following year as Alfa Romeo fell victim to new engine specification regulations. He agreed to drive for
Maserati in a non-championship race at Monza that year; arriving just half an hour before the race
having competed in Northern Ireland 24 hours previously. After missing a connecting flight, he drove
through the night all the way from Lyon to Monza, before beginning the race from the back. On lap
three, he was involved in a huge crash which resulted in him suffering a broken neck; an injury that kept
him out of racing until 1953.

For 1954, Fangio started the season with Maserati but switched teams mid-season as he moved to
Mercedes. He went on to win the title that season, and again in 1955. However, the latter triumph was
overshadowed by the greatest tragedy the world of motorsport has ever seen.

Just four hours into the Le Mans 1955, the other Mercedes car driven by Frenchman Pierre Levegh
lost control and crashed into the crowd killing over 80 spectators. Fangio was just behind the car that
crashed, having been on the verge of lapping the car, he witnessed the tragedy unfold from close quarters.
The incident left such a mark that Mercedes withdrew from motorsport and would not return till 2010.
So, before Lewis Hamilton won the World Championship with Mercedes in 2014, the last person to win
the Formula 1 World Championship with Mercedes was in fact, Juan Manuel Fangio.

Fangio switched to Maserati to lift the 1957 World Championship while driving the iconic 250F, making
him the oldest World Champion (46 years). He finally decided to retire in 1958. He still holds the record for winning the World Championship with the most number of teams (4), and also holds the highest win percentage after winning 24 of the 53 races. So irrespective of what records are matched or broken, everyone in the motorsport community accepts that Fangio was in a league of his own and has established a legacy which has made him immortal to every motorsport fan.

He is held in the highest regard in his home country of Argentina and has a museum of motor racing cars
called ‘Museo Juan Manuel Fangio’ in Balcarce, Buenos Aires. 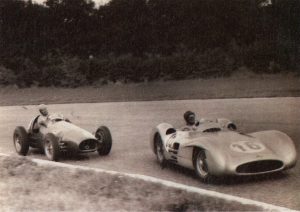 Fangio being chased by Alberto Ascari(his arch-rival) in the Italian Grand Prix 1954. 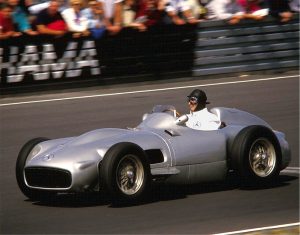 On February 25, 1964, @MuhammadAli defeated Sonny Liston to become the world's youngest heavyweight champion. @AmineSennoun9 recounts the historic day that gave birth to the #legend that is #MuhammadAli. #Boxing https://sportsgazette.co.uk/the-day-muhammad-ali-shook-up-the-world/

Last week, it was announced that RB Leipzig sold their star defender to Bundesliga rivals Bayern Munich. Par for the course in Germany, mad everywhere else as @CharlieWGordon reports. https://sportsgazette.co.uk/water-is-wet-the-sky-is-blue-another-bundesliga-talent-joins-bayern-munich/

Former British and Irish Lion and current @btsport pundit @ugomonye speaks to rugby writers @LPangratiou and @addley_jeremy about the importance of educating players on the history of taking the knee. https://sportsgazette.co.uk/ugo-monye-on-taking-the-knee/

There's nothing better than two Germans chatting about darts. Darts newcomer @flohempel_darts gave the SG an interview to talk about his former handball career and what he expects for the @OfficialPDC #ProTour
https://sportsgazette.co.uk/florian-hempel-when-one-career-is-not-enough/